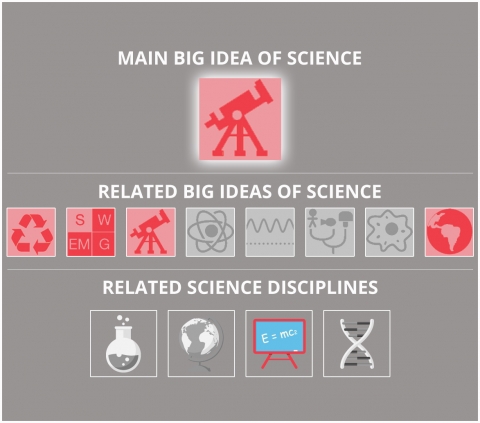 Galaxies are huge neighborhoods of stars, gas, dust, stellar remnants and dark matter. They come in different shapes and sizes. Based on their shape they are classified as spiral, elliptical or irregular. An average galaxies has approximately 100 billions stars. There are at least 200 billions galaxies in the visible universe.

Connection to Big Idea about energy: Galaxies form in different shapes and sizes – they can be elliptical, irregular or spiral shaped. The energy of the huge reservoirs of gas and dust which merge to form the larger galaxies, influence the shape of the galaxy.

Connection to Big Idea about forces: Galaxies are huge collections of stars, gas, dust and dark matter, all held together by gravity.

Connection to Big Idea about Earth: The Solar System is located within the disk, about 26,000 light-years from the Galactic Center, on the inner edge of one of the spiral-shaped concentrations of gas and dust called the Orion Arm. This specific position of the Solar system is a crucial factor in the evolutionary history of life on Earth. Our galactic neighborhood has rather low concentration of supernovae, gravitational instabilities, and radiation that could disrupt the Solar System.