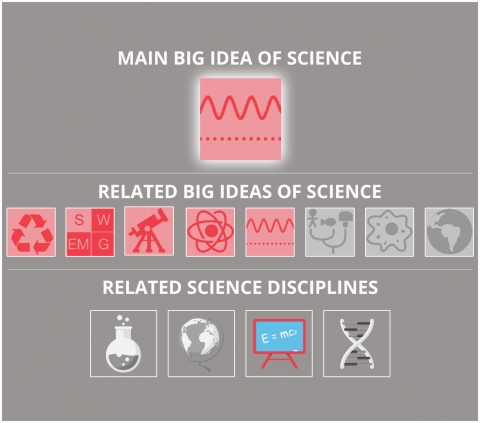 Quantum phenomena are those that occur due to the interactions of subatomic particles and can have microscopic and macroscopic effects. They are quite contradictory to our everyday experience.

Connection to Big Idea about energy: Electronic transition in atoms corresponds to a quantized energy. In order for an electron to switch from an energy level to another it needs to absorb or release a quantized amount of energy. As a result, atoms emit or absorb photons of specific elements which gives them a unique characteristic feature.

Connection to Big Idea about forces: The strong, weak and electromagnetic forces are described as discrete quantum fields Objects and particles interact through the fundamental forces by exchanging certain elementary particles (force carrier boson). Quantum phenomena are due to the exchange of these of elementary particles.

Connection to Big Idea about the universe: Each element forms unique dark or bright spectral lines on their continuous spectrum due to its emission or absorption of light in a narrow frequency range. These spectra lines are very useful tools for astrophysicists to estimate the chemical composition, the temperature and the surface gravity of celestial objects.

Connection to Big Idea about particles: Particles like photons and electrons can also behave like waves producing diffraction patterns due to the wave-particle duality.