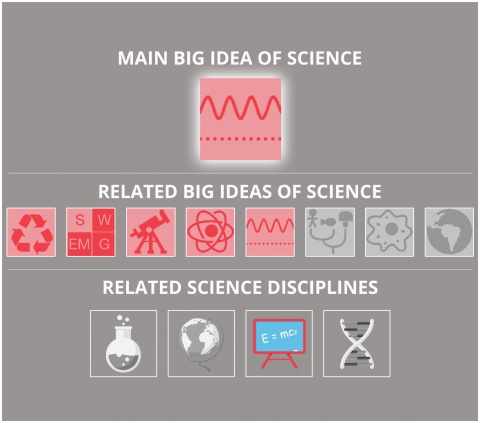 While in the classical world nature reveals a deterministic behavior (there can be a 100% accuracy in measurements and in predictions), in the quantum world the explanation of the phenomena can be only stochastically. That means that any quantum phenomenon can be analyzed statistically but cannot be predicted with 100% accuracy. The main properties of quantum mechanics are the quantification of energy (quanta), the wave particle duality, the uncertainty principle and the correspondence principle.

Connection to Big Idea about energy: Electronic transition in atoms corresponds to a quantized energy. In order for an electron to switch from an energy level to another it needs to absorb or release a quantized amount of energy. The distribution of electrons to the energy levels around a nucleus obeys Pauli’s exclusion principle which states that two or more electrons cannot occupy the same quantum state within a quantum system simultaneously.

Connection to Big Idea about forces: The strong, weak and electromagnetic forces are described as discrete quantum fields Objects and particles interact through the fundamental forces by exchanging certain elementary particles (force carrier boson). According to the standard model, fractions after the big bang the four fundamental forces were united to a single one.

Connection to Big Idea about the universe: According to quantum theory an electron bounded around an atomic nucleus can absorb or emit photons of quantized amount of energy. This property is very useful tools for astrophysicists to estimate the chemical composition, the temperature and the surface gravity of celestial objects.

Connection to Big Idea about particles: Nature has a wave-particle duality. For example light, that was classically regarded as a wave since it produces diffraction patterns on some experiments, has also a particle like behaviour when it interacts with matter, like in the photoelectric effect. But the same duality happens with what were traditionally regarded as particles: electrons, nucleus, or even large molecules like fullerene, have been shown to produce also diffraction patterns experimentally.