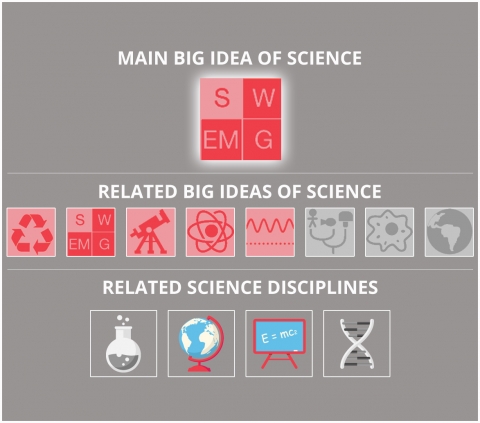 Rotations are motions due to one or more forces during which objects move around a fixed axis. Rotation around an object’s own axis (spinning) is one of the most common motions in nature. Celestial objects (like stars, planets and galaxies) all spin around their axis. Elementary particles (like quarks and electrons) have a property known as spin, an intrinsic angular momentum, as if they were spinning balls of charge. Many objects also rotate around other ones (for instance, the Earth rotates around the Sun, and electrons orbit the nucleus).

Connection to Big Idea about energy: Every rotating object contains energy. Rotation can be used to turn a source of energy to another (in wind energy turbines for example).

Connection to Big Idea about quantum: All subatomic particles spin around their axis. In quantum mechanics spin is an intrinsic form of angular momentum carried by elementary particles, composite particles (hadrons), and atomic nuclei.