Warning: "continue" targeting switch is equivalent to "break". Did you mean to use "continue 2"? in include_once() (line 1387 of /home/rd/html/platon.ea.gr/includes/bootstrap.inc). 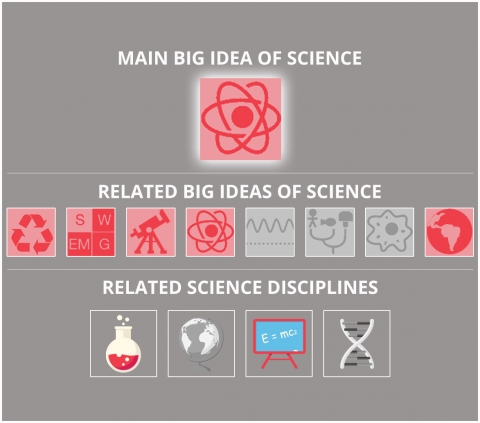 The four main states of matter are gas, liquid, solid and plasma. The state of a matter is determined by the comparison of the kinetic energy and the electromagnetic potential energy of the molecules that compose the object. If the kinetic energy is much larger than it dominates and the object is the in gas state, if the two energies are comparable it is in the liquid state, while if the potential energy dominates then the object is solid.  When matter is heated up so much that electrons escape the attraction of the nuclei and they become basically a 'soup' of electrons and nuclei which behave collectively under their common electric field. This state is called plasma. Plasma is the state of matter that dominates the Universe.

Connection to Big Idea about energy: As the internal energy of a system changes, particles turn more active or less active and can change their state from solid to liquid, from liquid to gas and vice versa.

Connection to Big Idea about forces: The electromagnetic force acts between the particles of matter. The forces in solid state between particles are stronger than in liquid and gas state.

Connection to Big Idea about the universe: The three states of matter (solid, liquid, gas) that we experience in our daily life form just the 0.001% of the visible mass of the Universe. The rest 99.999% of the mass in the universe is the fourth state of matter named plasma. A plasma is a hot ionized gas consisting of approximately equal numbers of positively charged ions and negatively charged electrons.

Connection to Big Idea about Earth: Earth is comprised of matter in all three states. The changes that occur in pressure and temperature on Earth cause matter to change from one state to the other.